Now, the average American would go through life with $4.13 in the bank account and no margin for life to happen.  "Life Happens" events like the HVAC unit going out.  Luckily, Jenn and I stopped living with blinders on and have saved for such events.

So here is the story.

In February, I received a MONSTER electric bill.  My reaction was like, "OH MY GOODNESS!  I could color in a ton of squares on the Sangl Family Home Pay-Off Spectacular if I did not have this huge electric bill."  So I did what anyone would do, I lowered the temperature of the thermostat and said to myself that we would just be a little chilly.  Well, we FROZE for the month of March and received another MONSTER electric bill.

I said to myself, "This sucks.  I am FREEZING and paying a ton of money on this stupid electric bill."

Luckily in April it warmed up nicely here in SC, and I was able to turn off the HVAC units.  I have been able to leave them off until this week.  On Monday night, it was over eighty degrees in the house and humid.  So I cranked on the AC and went to sleep.  When I woke up in the morning, it was still smoking hot.

I called my father-in-law who does HVAC for a living, but he lives far away.  He told me to do some stuff, but all of it would involve me electrocuting myself so I decided to call my local friendly repairman (who also happens to be in my home group).

A short survey of the situation revealed that the condenser fan was not spinning.  Thus the large electrical buzzing sound that has been coming out of the unit since FEBRUARY.  Did I mention that it was buzzing since FEBRUARY?  Oh, I guess that sound was important to note.

Turns out that I heated my house with the emergency strip heating for two straight months instead of the heat pump.  Turns out that consumes enormous amounts of electricity.  Turns out it consumed a lot of my budget for two months.

A few hundred dollars later, we are nice and cool again.  With thirty-something-year-old units.  It might help to know that I have money saved up to replace these units when they totally fail on me.

Do you have margin in your life to absorb "Life Happens" events?

You can read about how Jenn and I stopped being broke and won with our money in my new book, I Was Broke. Now I'm Not.  It is available via PAYPAL, AMAZON.COM, or BORDERS.COM.

I do not know if you have checked out the "I Was Broke. Now I'm Not." podcast recently, but perhaps you should.

Top Five Reasons to check out the podcast

My daughter has been really wanting a bunny rabbit.  Yes.  A real one.  For the past few weeks, it has been

This has been going on for nearly three weeks.

Monday, on the way home from Indiana, Melea announces that she no longer wants rabbits.  She wants an iPod instead.

You can read about how Jenn and I stopped being broke, and won with our money in my new book, I Was Broke. Now I'm Not.  It is available via PAYPAL, AMAZON.COM, or BORDERS.COM.

There were some great responses to the "How Do I Stop Being Impulsive" post!

I really feel like it would be helpful to follow up on this because this is such a common part of all of our lives!  We are ALL impulsive.  It seems to be different things for each of us, but we all have a case of impulsiveness every now and then.

I wanted to share some of the feedback that was sent in via the comments or from the "E-mail Joe" link.

Great conversation!  I wonder if any of you out there would share some "near misses" where you almost made a horrible, snap-judgment financial decision but you did not.  What helped you make the decision to back out?  How does it feel now as you look back on the situation?

Here are the standings for the Mutual Fund "You Pick 'Em" Game with just one week remaining.

Michael M. has retained the lead, but took a hit over the past week and a couple of the competitors have closed the gap.

Judy's mutual fund selection, China Bear 2X Fund, has demonstrated what investing in a true international growth fund is like.  In week one, it was #2 on the list.  In week two, it dropped all of the way to #20.  Now, it is back to #2!  This is why I define an investment as money that I will leave alone for at least five years!  I would have a heart attack if I was day-trading a fund like Judy's choice!

John X has closed the gap to hold #3 position after holding the #6 position the previous two weeks. 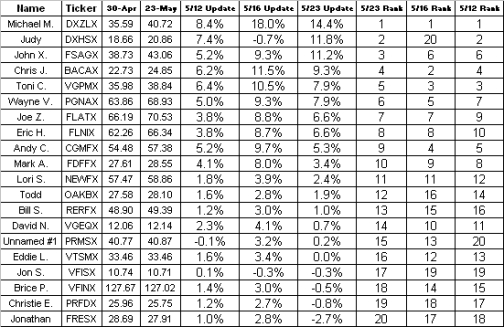 It is going to be a lot of fun to watch the performance over this last week to see who wins!