I was running on the treadmill at the YMCA (I'm training for another marathon) the other day, and ESPN was talking about baseball.

They ran the clip of Hank Aaron's 715th home run, and while watching it I saw something I had not seen before.

There, dead-center in the middle of the shot showing the home run ball leaving the park is a huge credit card billboard.

This was April 8, 1974.  I remember the home run very well since I was nine days old at the time. 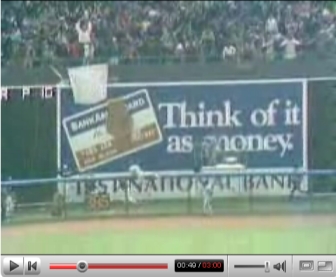 It was 1974 and credit cards were just taking off.

Look closely at the billboard.  What does the the "Bank Americard" (now known as VISA) purport itself to be?  MONEY

Genius branding.  Too many people have viewed credit cards as money, and now realize that it is really BORROWED MONEY.

By the way, you can watch Hank's home run HERE.