This couple has been married for many years and have one child.   They have HAD IT with their debt and have been marching toward debt freedom since November 2007.  They are THROUGH with credit cards.

We transferred JC Penney balance which was 21.99% to a 2.9% on Discover AND we transferred Chase that was 26% to a Juniper Mastercard at 7.9%.  We were VERY excited about those transfers.

It is also very encouraging to see the balance on the National City card come down!! It won't be long until that one is GONE!

Challenges this month have been the rising cost of gas and food, but we have just budgeted a little differently in some areas and made it work out fine!  Again, this month I have to say THANK GOODNESS for the budget form!!! We were able to pay cash for all back to school items this year and MAN! Does that ever feel good!!! 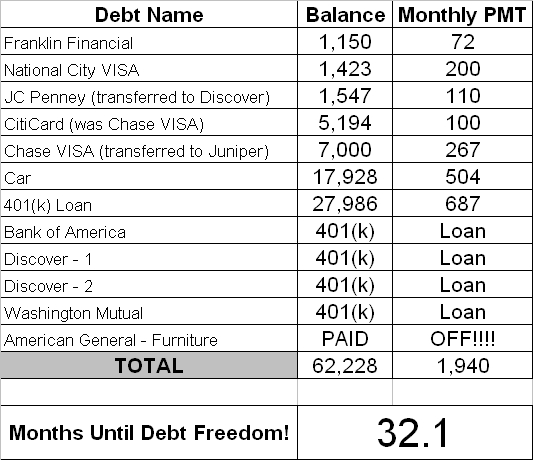 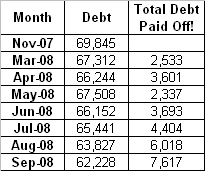 It is so nice to see Couple #3 reap the rewards of the hard work they put forth to restructure their debt.  Look at the tremendous progress they are making.  Instead of twenty percent of their payments going toward principal and eighty percent to banks, they have switched it around.  Now, over 80% of all of their payments are going toward principal reduction!  AWESOME!

If you have debt, have you considered restructuring it?  This can really help your debt freedom march gain a ton of traction and speed up your journey to ZERO DEBT!  I encourage you to read the series of posts I wrote called Restructuring Debt.

My book, I Was Broke. Now I'm Not, is available via AMAZON.COM, BORDERS.COM, and PAYPAL.  You can read the Introduction HERE.  In this book, you will learn exactly how Jenn and I became debt-free in just fourteen months.