I am excited to embark on this series of posts because interest paid toward debt is one of the largest obstacles to gaining traction for one’s own Debt Freedom March.

Of course, one way to eliminate the interest is to sell some stuff and become debt-free.  But I recognize that for some people, they have debt that they are going to have to focus on and just pay it off.  If this describes you, then I trust that this series helps you gain speed in your Debt Freedom March!

There are many approaches one can take to lower their interest rates.  In Part Two, I covered the “negotiation” avenue.  Today, we will discuss moving the debt.

If you live in America or any other heavily-leveraged society, then the chances are that you will receive numerous offers of debt every week.  Most of these offers have a “trickeration” ploy that generates consumer interest.  The trickeration is typically a “Zero-percent for some number of weeks/months/years” ploy.  The reason I call it a trickeration ploy is the fact that the majority of these debts are not paid off within the set timeframe and the interest rate is back-dated all the way to the date of purchase – usually at a very high rate.

But the zero-percent surfing game CAN work for you.  I have seen MANY people gain substantial traction with their Debt Freedom March through this technique alone.

Here is how the surfing game works.  You receive a “zero-percent for twelve months” credit card offer.  There is usually a $75 balance transfer fee, but there is no interest for the twelve month period.  One simply applies for the 0% card and transfers their high interest debt to the credit card.  When that introductory period is drawing to a close, surf the balance to another “zero-percent for twelve months” card.  Keep surfing the balance until the debt is paid off to $0.

If you successfully do this, you have actually tricked the trickeration ploy into working for you!

There are several 0% credit cards that you can apply for ON-LINE!  Click HERE to view the 0% credit cards available via the Next Steps division of I Was Broke. Now I’m Not.

I am excited to embark on this series of posts because interest paid toward debt is one of the largest obstacles to gaining traction for one's own Debt Freedom March.

Of course, one way to eliminate the interest is to sell some stuff and become debt-free.  But I recognize that for some people, they have debt that they are going to have to focus on and just pay it off.  If this describes you, then I trust that this series helps you gain speed in your Debt Freedom March!

This really catches some people off-guard.  For some reason, they believe that the interest rate is truly fixed on their debt.  Well, just as "fixed rates" on credit cards are not truly fixed and can be (will be) changed at any time, your "fixed rates" are negotiable.

Paying high interest on a debt?  Call the customer service line and try some of these lines out (only if they are true, of course!).

Things NOT to say …

The first person you talk to will probably not have the authority to change the terms of your loan.  Be persistent and ask to speak to their manager.  I have had people tell me that it has taken several separate phone calls before they got their interest rates lowered.  Many times in spite of a great effort, folks have been unsuccessful and the interest rate was not lowered at all.  That brings us to another option. – Move The Debt – and this will be discussed in the next part of the Restructuring Debt Series.

I am excited to embark on this series of posts because interest paid toward debt is one of the largest obstacles to gaining traction for one's own Debt Freedom March.

I have said and will continue to say that I believe that the top causes of financial failure are disorganization and the lack of a plan.  If you want to gain the maximum traction on your Debt Freedom March, you need to pay the minimum interest possible.

In many of my financial counseling appointments, we add up the amount of interest that is being paid each year, and it SHOCKS the ones who have been paying it!  There is something about SEEING IT ON PAPER that really connects us to the fact that paying interest is not a healthy financial plan.

The form is very user-friendly.  All you have to do is enter the debt name, the balanced owed, the monthly payment you are actually paying, and the annual interest rate of the debt.   Below is an example. 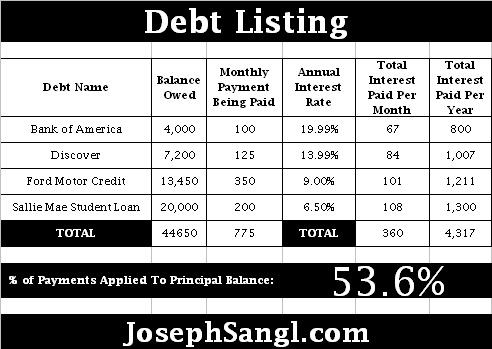 In this example, you can see that this person has four debts totaling $44,650.  The big issue is that $4,317 is being paid in interest every year.  In fact, only 53.6% of the monthly payments is being applied to principal reduction.

Now that we are organized it is time to look for ways to reduce/eliminate the interest being paid.  That will be covered in Part Two of "Restructuring Debt"!

If you are a leader or are developing yourself to be a leader, I highly recommend you jump over to Amazon.com and pre-order Tony Morgan's new book – Killing Cockroaches.  Tony serves as the Chief Strategic Officer on the Strategic Management Team here at NewSpring Church, and he is freakishly smart when it comes to leadership and strategy.  As a plus, he is a funny.  I would also subscribe to his website.  His blog is on my short list of every day must-reads.

Oh, and this other no-name guy named Andy Stanley wrote the foreword for Tony's book.

While you are at it, you might want to pick up Tony's other three books on strategy that he co-authored with Tim Stevens.

Find other great resources at the I Was Broke. Now I'm Not. Amazon.com Resource Center.

This couple is THROUGH with debt!  It has now been eight months since they announced that they were breaking up with debt.  They have agreed to share their Debt Freedom March with everyone in the hopes to inspire others to do the same!

Here is this month's update.

We are still on the wagon, just very busy.  Everything is still going well.  We are still using our cash envelopes  …and loving it!!  We have really gotten the hang of things and luckily we don't have a whole lot of ups and downs.  Everything is running steady and smooth.  Our upcoming goal is paying off vehicle #1.  It won't be long!!!  The most exciting thing for us right now is seeing our balances (debts) get lower and lower.  One vehicle balance is less than $4,000 and the other just dropped below the $20,000 mark.  Seeing little accomplishments like those keep us going.  We are seeing the light at the end of the tunnel, and it is very exciting.
Here is their updated Debt Freedom Date calculation … 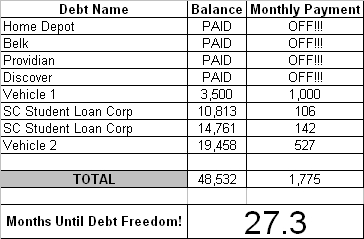 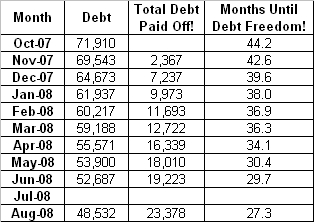 Sangl Says …
Couple #2 is in a time of financial blessing, and they have decided that they are going to manage it to the very best of their ability.  In just 10 months, they have reduced their Debt Freedom March by 16.9 months.  At this rate, they will be be 100% debt-free in just 16.1 months!
Vehicle #1 will be gone just in time for Christmas!  There is nothing like a paid-for car.  The $1,000/month payment will then be applied to the SC Student Loan.  Too bad for SC Student Loan.  They expected that Couple #2 would be paying toward that loan for the next ten years.  Instead, it will be gone in the middle of 2009.
Simply awesome.
Readers …
Couple #2 is on a roll.  You can do the exact same thing!  Pull up the [download#4#nohits] and put together your own Debt Freedom Date!
If not now, when?
Read Previous Updates For Couple #2
You can receive each post from www.JosephSangl.com FREE via E-MAIL by clicking HERE!
Posted in Finance
1 Comment