Why are Thomas Stanley and William Danko www.JosephSangl.com Financial Heroes?

I have always said that if one wants to become wealthy, you should speak to wealthy individuals and learn what they have done and are doing to create more wealth.  You do not go to your broke brother-in-law to become wealthy!!!

Stanley and Danko take this to an entirely different level!  They went to the wealthy people and conducted studies on their behaviors to try and understand why they have become wealthy.  What they found is AWESOME!  It is best summed up by the start of the book which I have transcribed here …

Oh baby!  This book proves WITH PILES OF DATA (you KNOW that I love that!) that the "keeping up with the Jones'" crowd are destined to remain B-R-O-K-E.

Stanley and Danko talk about UAWs and PAWs.  Under Accumulators of Wealth (UAW) and Prodigious Accumulators of Wealth (PAW).  There are many professionals who have a relatively large net worth but are actually UAWs.  Why?  Because just because you have a net worth of $350,000 does not mean that you have done well financially!  What if you are a doctor who is earning $240,000 per year?  Is $350,000 a prodigious amount?  ABSOLUTELY NOT!  To be a PAW, a 40 year old doctor earning $240,000/year would have to have a net worth of $960,000 or more!

Don't get it?  Read the book!  It will challenge you in ways you have not been challenged financially.

Thomas J. Stanley and William D. Danko – You have officially been named a www.JosephSangl.com Financial Hero!

CNNMoney.com had a great article about American's savings status on April 11, 2007 titled Have Less Than $25K In Savings?  Get In Line

It is sobering and backs up what I have been saying about American's spending habits!  We are spending ourselves to oblivion!

This makes me want to CRY!!!  What are we thinking?  That some magical fairy will show up at retirement and pay all of our bills?  Are we so oblivious to this epidemic that we can't see it or have we just chosen to ignore it?

Read that key point again!  Forty percent are not saving for retirement right now!!!  What are they going to do?  What are their plans?

Folks, this crusade is so HUGE!  I need your help in reaching others!  Have you spoken to your friends and family about this?

It is NOT HARD!  It is NOT hocus pocus … it is FOCUS pocus!  It takes about 2 hours to sit down and put together an INCOME – OUTGO = EXACTLY ZERO budget!  The tools are free on www.JosephSangl.com!  Just click on TOOLS at the top of the page!

Let's reach America and show them a better way!

Why is DAVID BACH a www.JOSEPHSANGL.com Financial Hero?

A friend of mine named, ironically, David, gave me a copy of David Bach's book, Smart Couples Finish Rich, to read.  That was all it took for me to name David Bach a Financial Hero.  In this book, David Bach talks about the importance of working together as a couple on your finances.  In relationships, money represents so much more than just something that is used to pay for things.  If allowed, money can dictate who has the power and control.  Money is connected to so many aspects of life and relationships.

David Bach also emphasizes the importance of making things AUTOMATIC!  If you make your investments automatic via automated monthly withdrawals, you can't help but become wealthy!!!

David Bach's materials should be required study for juniors and seniors in high school!

David Bach, you are an official www.JosephSangl.com Financial Hero!  I admire your personal crusade to help others win with their finances!

Why is ROBERT KIYOSAKI a www.JOSEPHSANGL.com Financial Hero?
Robert Kiyosaki became a Financial Hero of mine when I had given a copy of Dave Ramsey's Financial Peace, Revisited, to a summer engineering intern named Justin who was working at the manufacturing plant that I was at.  In turn, Justin gave me a copy of Robert Kiyosaki's book, The Cash Flow Quadrant.
I read the book and LOVED it!  I read this book within two days.  If you want to win financially, this book is a must-read.  What I loved most about The Cash Flow Quadrant is Robert's focus on your financial and overall mindset.  Do you have the mindset of an employee or a business owner?  Do you have the mindset of a professional or an investor?
Your approach to management of your money is crucial in creating wealth.  Thanks to Robert, the letters E, S, B, and I will never be looked at the same!

After I had read The Cash Flow Quadrant, I realized that Robert had previously written a book called Rich Dad, Poor Dad.  This book is just plain motivating!  Robert shares his story of growing up with a poor dad (his father) and a rich dad (his friend's dad).  He shares how his own father was highly educated, but was always broke.  Meanwhile, his friend's dad did not have all of the degrees, but was very wealthy.
Robert does emphasize the use of the bank's money to leverage the purchase of some properties which makes me a little uncomfortable, but that does not deter me from naming Robert Kiyosaki as a www.JosephSangl.com Financial Hero because Robert PLANS THOROUGHLY and has the heart of a teacher.
Robert, you are an official www.JosephSangl.com Financial Hero!  You force me to think differently.  I love that!
Read about other www.JosephSangl.com Financial Heroes!
Posted in Finance
1 Comment 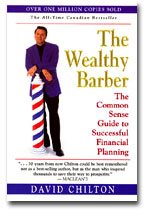 Why is DAVID CHILTON a www.JOSEPHSANGL.com Financial Hero?

My dad gave my twin brother and I a book when we were around twelve years old.  The book's title?  The Wealthy Barber

This book is written as a fictional novel set in the Detroit area.  The book is very easy and quick to read.  The primary lesson learned in this book is the POWER of Compound Interest.  I remember setting that book down at around twelve year's of age and saying, "If a barber can be a millionaire, then I will be too!"  AT AGE 12!!!

Why should DAVID CHILTON be your Financial Hero?

David, you are an official www.JOSEPHSANGL.com Financial Hero!  At age 12, my world was rocked through your book!  My financial future was forever changed by learning the POWER of compound interest so early in life.

Want the book?  Get it HERE.