You may have wondered why there was silence on the blog for most of the past week.   It was because I was able to kidnap my bride away from our two beautiful children and do something we have never done before – go on a cruise through the beautiful Caribbean!

As we boarded the 991-foot long Caribbean Princess bound out of San Juan, Puerto Rico for St. Thomas, Tortola, Antigua, Barbados, and St. Lucia, I was overwhelmed at how blessed I really am!   I can not believe that I am so blessed that I am able to take such a tremendous vacation – and to do it without debt.

I just want to share a picture (click on the picture to get a better view) and a few things that I love about taking “paid-for-in-advance” vacations. 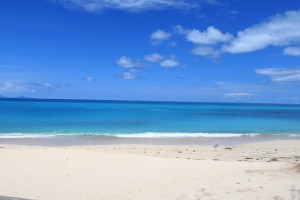 This is a guest post by IWBNIN team member, Mark Asbell.

It is very frustrating to see the US National Debt total consistently going up up and up with little to no plan for ever being able to fix it.  When Joe updated everyone in March about the new total US National Debt, I caught myself in the middle of a very disturbing thought and emotion.

It isn’t difficult to understand that the number is going up up and up, but the number is SO LARGE I can’t even begin to really comprehend it.  Throw all the analogies my way about how it would take so many hundred dollar bills that it would fill up the ocean or whatever – I still can’t really wrap my mind around $14,000,000,000,000 (trillion).

In March Joe posted how much $14 trillion translates for each of us as individuals if we all split it evenly.  The number is over $46,000 per person in the US.  I can understand $46,000, in fact I had heard a number like that before.  When I read that my portion of the bill was only $46,000 I caught myself literally thinking “my part hasn’t gone up that much since the last time I heard that number”, and I felt as though it wasn’t so bad.  That is a ridiculous thought to have, and it reminded me of a tragic flaw in the thought process I once had with my own personal finances.

For several years, my wife and I racked up a horrible amount of debt.  I never dreamed we would ever get behind on bills but we did.   As I think back on those times, I realize part of the problem was I would get a credit card bill, see the balance going up by large amounts and think “dang”.  But then I would see the minimum payment only go up a little bitty bit and I would think, “I can handle that for now and pay it off later.”  Fast forward a year or two – the same credit card balance was still going up and the minimum payment was eventually getting beyond my means.  I eventually had to reach a breaking point to turn things around.

My family almost lost everything when we hit our breaking point.  It doesn’t have to be that way for our personal finances OR our national finances.  We should be more concerned with what the OVERALL TOTAL US Debt is and take it VERY seriously that our share is going up a little bit more every day.  How long will it take for us to view that number as beyond our means?  What is the breaking point going to be for our Nation?

Have you ever known someone whose life seemed to always be be in financial turmoil, BUT there really was no reason for it to be that way?

After all, they appear to have everything necessary to succeed financially.

But they are completely B-R-O-K-E.   Every single paycheck is immediately handed over to the lenders.   They’ve declared bankruptcy once, and it appears that they feel like a second one wouldn’t be too bad.   Every little bit of extra money is immediately spent on stuff that has zero value (or soon will have no value).

As the leader of an organization on a crusade to help people accomplish far more than they ever thought possible with their personal finances, this can be extremely frustrating.   We KNOW that everyone can win with their money.   We KNOW that it is possible for everyone to prosper.   Yet, it appears that some people choose poverty.

Surely you know somebody (somebodies) that lives this way.

I want your help understanding this behavior. Can you leave a comment below sharing the reasons you believe some people choose to live this way?

If you weren’t able to read Part 1 and Part 2 of this series, you should do that first.

If you do not know where all of America’s money is going, it will be really difficult to speak with authority on the topic.   It is important to become informed – understand where the money goes and why it is going to each program.

Here are some great places to start becoming informed:

If you weren’t able to read Part 1 of this series, you should do that first.

PART TWO   BE READY TO SACRIFICE

We must understand that the cuts do not mean that the programs are not good.   It just means that our nation is out of money!

I am a simple person, so let’s make this really simple.   If my budget shows a deficit, I MUST balance it to EXACTLY ZERO.   After all, it is my trademarked catchphrase: INCOME – OUTGO = EXACTLY ZERO

There are two ways to balance the budget:

Experts generally agree that some of both #1 and #2 must happen.   BOTH will require personal sacrifice.   Get ready.