This is a guest post by Mark Asbell, who recently became debt-free following the principles of I Was Broke. Now I’m Not.

When I was going broke I’ll never forget the moment I realized the hole I was digging was getting over $400 deeper every single month.  That doesn’t even count the large chunks of debt I got into in order to make big one time purchases.  Just our normal monthly expenses were $400 per month more than our monthly income.  At that time $400 a month was less than 1% of my annual income and my total debt was less than 4 times my annual income (including the mortgage).  So I was able to keep getting more and more credit in order to sustain our deficit UNTIL…  Lenders stopped giving me more credit.  We were maxed out.  We couldn’t pay what we already owed, so why would anyone lend me more?

The United States government is facing the same dilemma on a much grander scale.  Their total debt is 7 times their annual income (Gross Domestic Product), and the hole is getting deeper by almost 4% of their annual income EVERY SINGLE MONTH.  I’m no economist but I’ve been to broke and back and the US numbers are wayyy worse than mine were.  I know what I had to do to dig out of the hole, so what does digging out of the hole look like for the government?

Mark Asbell is a key member of the I Was Broke. Now I’m Not. team and has a blog focused on helping couples strengthen both their finances and their marriage – www.markasbell.com – For Richer or Poorer.

I was pondering about my family’s journey to debt freedom, and it brought to mind the following words:

Those are the words that I thought of.  What are some that you would add?

It was 5 years ago TODAY that I gave up on my dream to become a Fortune 500 CEO, and moved back to join the staff of the church that my bride and I had the unbelievable opportunity to help start – NewSpring Church – in Anderson, SC.  I am so grateful for the opportunity that my great friend and pastor, Perry Noble, gave me to pursue a dream of helping people accomplish far more than they ever thought possible with their personal finances.

It is ASTOUNDING what God has allowed me to be a part of in just five years.  Here are just a few.

I write all of this not to boast in what I have done, but what the Lord has allowed me to be a part of.

I’m often asked why I’m so excited and passionate about what I do.  After reading this list, perhaps you might understand a little more about WHY I am so FIRED UP all of the time!  I’m a witness to the power of God moving greatly upon my behalf!

I really believed that great things could happen when I surrendered to this call 5 years ago, but I thought it would take 30 years.  It has me wondering what will happen over the next 5 years!

I was thinking of words that describe true financial freedom.  Here is the list I came up with.

What words would you add?

If you are carrying a credit card balance or a furniture purchase with a typical interest rate of 14.00%, 21.99% or 27.99%, you can save an incredible amount of money by transferring your balance to a 0-percent balance transfer credit card!

Here is an example of savings that can be achieved. 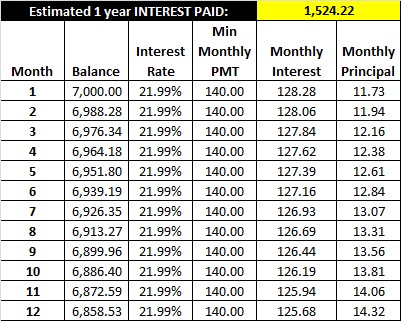 If this balance were transferred to a 0-percent balance transfer credit card with a 3-percent transfer fee, the calculations would look like the following. 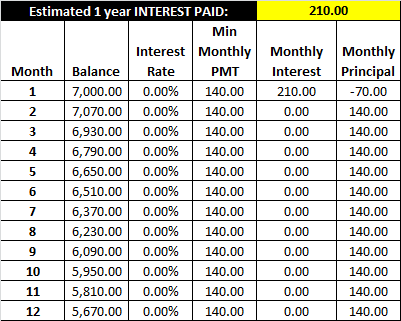 This ONE MOVE could save $1,314.22 in ONE YEAR! If the balance would not have been transferred using a 0-percent balance transfer credit card, the actual balance owed would have dropped by a mere $141.47. By choosing to take just 15 minutes to fill out an on-line balance transfer application, a total principal reduction of $1,330 could be realized.